Share With Your Friends
Why are my Onions Flat Bottomed or Dome Shaped?

A friend of mine was up with me yesterday and brought me something I hadn't seen in a while. He was asking me if there as something wrong with his onions because when he pulled them up, the bottoms of the onions were flat. The actual shape of the onion was dome shaped rather that the traditional round or globe shape we are all used to seeing.

I told him that there was no need to panic and asked him what variety of onion sets did he sow. He wasn't sure but from what he remembered of the name, I'm pretty sure that it was the variety Stuttgart Giant. He was fairly dissapointed with the results because while growing as a normal onion, the top half was exposed from the soil and it looked like in his words, I have fooballs growing in the ground, only to discover when he pulled them that in fact, he only had the top half of a football!!! 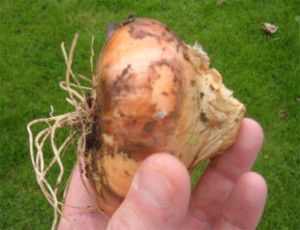 This is just the type of Onion that Stuttgart Giant are. They are known as a flat onion. There is nothing wrong with them and taste perfectly normal. The only issue with them as far as I am concerned is that because of the dome shaped, they are a pain to peel compared to regular shaped onions.

How do I know if my onions will be round or flat?

In fact some lables actually have this written on the onion set packet. It might say globe or flat onion, so make sure to look out for that.