How to Control Against Scale Insects

Scale insects are a common pest that sucks on the sap of many ornamental and production crops. These insects can infest and weaken it's host plant as they literally drain the life out of their stems in their feeding frenzy. While removing sap from plants they also excrete a sugary substance called ‘Honeydew’ which forms white, waxy mounds on stems and foliage. 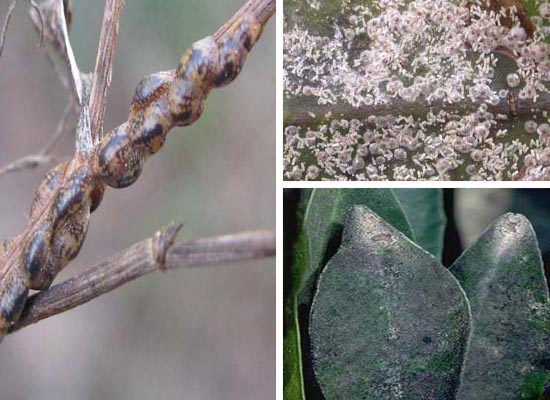 Plants effected by the scale insect include greenhouse plants, house plants, fruits and ornamental shrubs. However they are most common indoors and in sheltered areas

How to Spot Scale Insects

Scale insects take on many forms and there are about 8000 different species. To recognize and spot scale insects then you should be aware of the different forms which they can take:

Size:  Scale insects are be as small as 1-2 mm while others can be 5mm across

Location: Insects can be found on the underside of foliage & stems. While the white honeydew and black sooty mounds can be seen beneath the infestation

The young and female insects are mostly immobile and therefore remain in a permanent position on the plants. The male will eventually develop wings

How to Control Scale Insects

Biological
Use beneficial insects such as the parasitic wasp or lady bugs. These friendly bugs can attack the hapless scale insects and reduce your infestation problems

Chemical
There are a number of chemical options and all are best used on the young ‘crawlers’ or nymph stage. Adult scales are protected by their shells and this makes insecticides less effective

Some effective active chemicals include