It can sometimes feel like it is never going to happen, but eventually Spring will arrive and with it, the opening of buds on our hardy native trees. It is certainly a delight to see as we can finally say goodbye to the Winter and hello to warmer days and longer evenings. 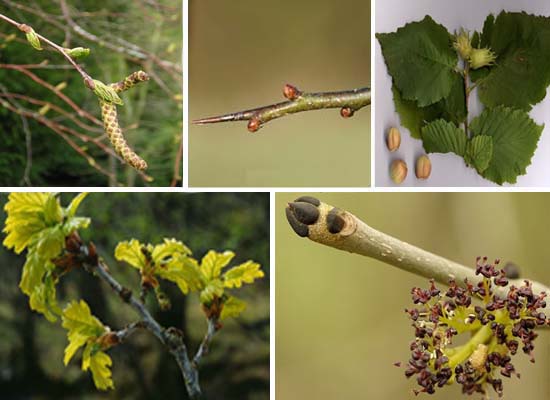 The period over which trees come into leaf extends from mid February to mid May, it can vary in different parts of the country and with every spring being different from the last, it can vary from year to year. There is only one certainty and that is, eventually it will happen – but rarely happens soon enough.

The more you get to know your native trees the more you can really appreciate the countryside and surroundings in which you live. Being able to distinguish the individual trees and noting their different appearance and development over the year is a real pleasure and will allow you appreciate all the wonders that our quite unique four seasons have to offer.

So when your out walking the dog, or enjoying a stroll, keep an eye on the trees that grow around you and watch as they come into leaf.

Below is a month by month order of trees coming into leaf in Ireland.

February in the Countryside
By the middle to end of February our hardest (in more ways than one) of trees burst onto the scenes – Prunus Spinosa – or what we would commonly know as Blackthorn.

In Milder condition Hazel can be known to show it's head, but this is more common in March.

March in the Countryside
March is the beginning of real activity in the garden and countryside. This is the time we all look forward to after a long hard Winter. Early in the month we can see Elder (Sambucus) coming into leaf, by the middle to end of the month Hawthorn (Craetgus),  Hazel (Corylus) & Willow (Salix),  with its distinct yellow stems that glow in a low Winter’s sunlight come into leaf.

April in the Countryside
Some of the more cautious of our natives wait until April before stepping out of dormancy. By April the majority of  the frosts have passed and only a few light frosts would generally occur this month. Trees including Birch (Betula Pendula), Crab Apple (Malus), Alder (Alnus) & Rowen or ‘Mountain Ash’ (Sorbus) come into leaf early in the month. The Stately Oak (Quercus) & Ash (Fraxinus)  battle it out for the honour of last in the class.

May in the Countryside
This battle is generally won by the Ash tree which often doesn’t come into leaf until May. Not only is Ash last to put on leaves but it is also one of the first to loose them in Autumn.

So that is the general order of play, but every Spring seems to throw something different at us. Temperature and day length is what stimulates our trees back to life,and as day length is a constant from one year to the next, it is temperature that is the determining factor in whether trees are late or early.