Share With Your Friends
Preserving Beetroot - How to Pickle Beetroot

Growing beetroot is very easy. The only problem with it is that by the time it is ready to eat, unless you pull it as 'baby beetroot', it's past the summer and the most common time for salads has passed. There are some people who just love beetroot, pickled or un-pickled and would have them with anything at any time of the year.

Me, I prefer them in my salads. So what to do with my crop that is ready for picking? Well, I pickle them of course. People may think that it is a complicated process but it is not and I will show you how to pickle beetroot in the following blog post. 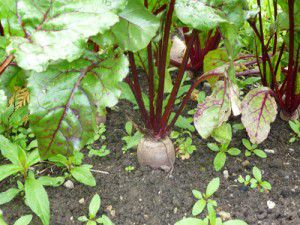 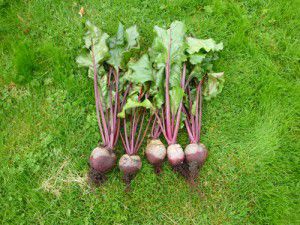 Easy enough, just pull them out of the ground. The don't sit deep in the soil and in fact a lot of the beetroot can be seen above ground. Just give them a shake to knock off excess soil on the beetroot's roots.

Chop the stalks off the Beetroot 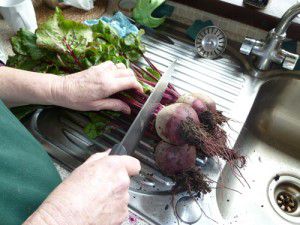 Cutting the Stalks off the Betroot

The next step is just to cut the stalks off the beetroot. Make sure not to cut too near the top of the beetroot itself. You can leave an inch of the stalk on the beetroot. The same applies to the roots themselves. Do not cut these back fully, again leaving a bit at the end. The reason for this will become clear later. 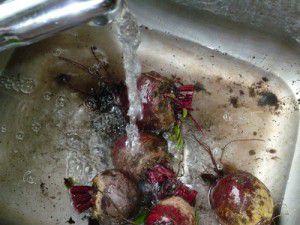 Give the Beetroot a Good Wash

You don't have to go nuts here, just give them a decent scrub under the tap in the sink to get the worst of the dirt off them. 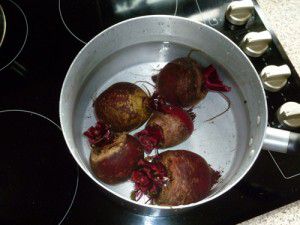 How to boil Beetroot? Well, it's pretty much what it says on the tin. Bring a pot of water to the boil, place the beetroot in and reduce the heat to a good simmer and cook for as long as it takes. It can take 30-40 minutes to boil a beetroot properly depending on it's size. You will know that the beetroot is ready by sticking a sharp knife in it and if the knife goes through with little resistance, it is ready. It’s much like boiling potatoes really. Take them out and let them cool a bit before going on to the next stage.

Remove the skins off the Beetroot 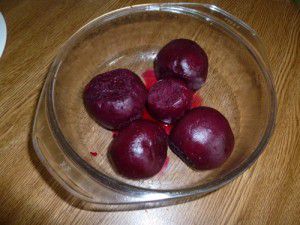 Remove the Skins from the Beetroot

The skins will come off easily and can actually be rubbed off, there is no need to peel them. You can chop off the stalk and roots part the beetroot at this point. 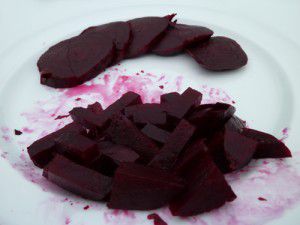 The beetroot is ready to be chopped or sliced at this point. I prefer to chop it roughly but you may like to slice it as you would find in shop bought beetroot. It’s up to you.

Simmer the Chopped Beetroot in Vinegar Pour around a pint of white wine vinegar (make sure it's at least 5% acidity), into a pot. The general rule for adding extra flavours is that you should add 8oz of sugar per 4lbs of beetroot and a teaspoon of salt. Bring the vinegar to the boil and then simmer for around 10 minutes to allow the sugar & salt to dissolve. Give the mix a stir occasionally while it is simmering.

Sterilise the Jars you're going to Store the Beetroot in While the beetroot is simmering, you need to sterilise the pots or jars that you are going to use to store your pickled beetroot. To do this, just simply pour boiling water (make sure it's boiling) into the jar and swirl it around and also make sure to do the lids also. Be careful at this point not to splash yourself with the boiling water.

Jarring the Beetroot Place the cooked beetroot and vinegar into the jar or pot. You can fill it pretty much full but not right to the top. Seal the jar with the sterilised lid. Remember, the jar and the beetroot are going to be hot at this stage so be careful when handling.

What to do next? 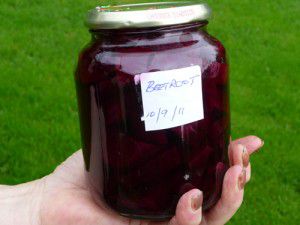 Leave the jars to cool for a bit and then put them somewhere cool and dark for storage. Label the jar with the date of production, so you'll know which is the older and newer of your pots. The pickling takes around 6 weeks to work best but you can eat them at any point. Well pickled and preserved beetroot can keep for a year and there is nothing quite like eating your own pickled beetroot the following summer.

A special thanks must go to Rose Fogarty for showing me how to do this years ago.